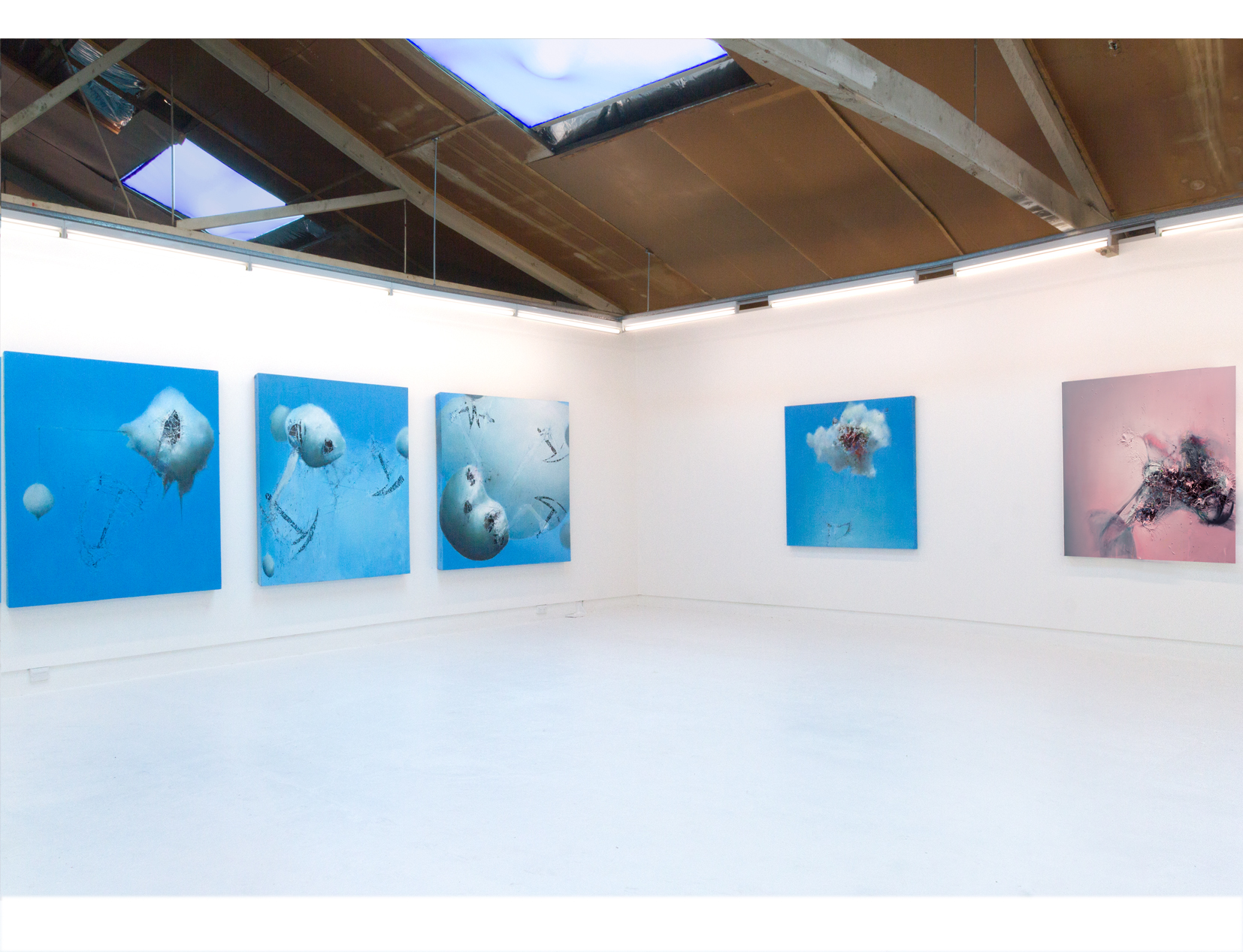 The series of paintings from 2007-8 previously exhibited under the collective title of Tomahawk could be read as purely abstract works, raw yet balanced compositions of light foreground marks and slashedand stitched canvas played against expansive blue backgrounds. The cut canvas brings to mind the work of the Italian neo-avant-garde artist Lucio Fontana, most well known for the punctured and slashed canvases of his long series of Spatial Concepts. The parallel between Douglass and Fontana is not simply one of formal techniques shared between two ‘abstract’ artists; rather, it occurs at the level of the fundamental concern common to both artists, which could be characterized as an exploration of the signifying potential of abstract marks. In the many manifestos he published in the 1940’s and 1950’s, Fontana frequently attacks abstract and concrete art, calling it a ‘daydream…sterile and empty’.1. Rather than being purely concrete, his work attempted to communicate an idea of immeasurable, infinite space, one that would be freed from the ‘horizon line’ that dominates everyday human experience and would be appropriate to the age of interplanetary sciences, ‘immaterial’ forms of communication (radio and television transmission) and quantum mechanics.2.

The paradox of the work of Fontana and his colleagues in the ‘Spatialism’ movement (especially Gianni Dova, Vinicio Vianello and Enrico Donati) is that they achieve their allusion to the sublime and immaterial precisely through procedures that stressed the materiality of the canvas to a degree far beyond that of standard practices of abstract painting: cutting, poking holes, pouring paint onto unprimed canvas, molding reliefs out of broken glass and sand. Douglass’ works obey the same logic: bearing in mind their relation to Fontana’s Spatialism and their titles, the linear designs of cut canvas in the Tomahawk paintings become semi-material weapons wielded by amorphous alien entities pictured against sublime expanses of blue sky. In the more recent paintings, deep gouges in the triple layered canvases become passages between different orders of materiality and space, a theme suggested not only by the theological controversies surrounding the issue of how a supra-material being (God) can govern a material order, but also by the way in which contemporary physics and cosmogony refuses unitary models of both space and time through concepts such as antimatter, black holes and Trotta’s ‘dark energy’.

As Fontana’s young collaborator-antagonist Enrico Baj demonstrated when he launched his sardonic ‘Interstellar Art’ movement in the late 1950’s, the concepts and imagery found in Spatialism were not only sourced from the respectable realms of science and pseudo-religion, but were also tied intrinsically to the concerns of popular science-fiction. Like Baj, Douglass makes his debt to sci-fi clear, but unlike Baj, he does not do so in order to re-orient the cosmic themes at play in his work towards an ironic political-cultural critique of how these ideas are co-opted by military and mass-media technocracies.3. Although the more recent works in the show, all of which feature dense conglomerates of toys and action figures set into partially stitched-up holes in the canvas, are far from dour (indeed they take a ludic joy in their material components and surfaces that is at times reminiscent of the rich excesses of the late work of Dieter Roth), the references to science-fiction, now made explicit, are carefully chosen precisely for their sublime-cosmic aspect. Luke Skywalker from the Star Wars series, Dr Manhattan from The Watchmen, Dr. Zaius from Planet of the Apes and the characters from Masters of the Universe who appear in these paintings are all elements of science-fiction and fantasy narratives which contain cosmic-mystical resonances. This is perhaps clearest in the figure of Dr Manhattan (who appears in the painting I feel fear for the last time), clearly positioned in The Watchmen as a semi-divine figure, omniscient, outside of linear time and coated in luminous blue like the Hindu deity Shiva (and, in being named after the Manhattan Program which developed the atomic weapons used at Hiroshima, linked to the threat of nuclear war, which is, remembering that Kant defines war as the only man-made phenomena which can give us the sublime experience of becoming conscious of ‘our superiority over nature within, and thus also over nature without us’,4. a properly sublime theme).

By locating his cosmic-sublime themes in science-fiction materials rather than religious or mystical texts, Douglass brings them into the sphere of everyday life (insofar as this may be thought to involve, for many, the consumption of the pop-cultural objects in which these characters and themes appear), just as in his 2009 project And the Gods Made Blue, he anonymously inserted large blue panels into a abandoned house in Melbourne’s northern suburbs. Rather than explicitly bridging the sublime and the everyday in the way his suburban guerilla installation did, the blue intrusions coming from the skylights that form the third series of works exhibited in the present show serve to extend and clarify the paintings on display in the gallery, their placement in the skylights making clear the connection between the blue expanses of many of these paintings, the blue lycra of the intrusions made and the blue of the sky itself outside the gallery.

Extending into areas of the ceiling space nearly invisible from the viewer’s perspective in the gallery, these amorphous blue shapes appear more like unintentionally arresting objects designed with a utilitarian purpose (or even as natural phenomena) than as purposefully constructed works of art, and it is here that we can see how their intentions perfectly compliment those of the paintings on display in the exhibition: whether in the form of science-fiction, utilitarian architecture or the sky itself, Douglass’ intention, in a mode simultaneously straightforwardly romantic and playful, is to direct us towards the possibility of sublime and beautiful experiences in the heart of the everyday.

3. On Baj, see Stepehen Petersen, Space-Age Aesthetics, pp. 103-152 and Martina Corgnati, ‘Armaments of Imagination or Hypothesis of Resistance: from the Movimento Nucleare to Pataphysics’ in Vanished Paths: Crisis of Representation and Destruction in the Arts from the 1950s to the End of the Century (Milan: Edizioni Charta, 2000), pp. 107-129.